For years I've fought the urge to have everything "perfect" before starting anything, and while I have won most of the battles, most of the time, against that particular monster, occasionally it rears its ugly head just to see if it still has a chance.

And so it's been the last little while. Admittedly after months of packing, unpacking, moving, settling, then moving again, I was getting a little jaded, and with it being a particularly busy summer with shows and sales I hadn't been able to get my house unpacked and a lot of things out of storage. I can only operate in a state of chaos for so long and then I draw the line, and it is usually at that point that the perfection monster sees his chance and grabs it.

I had spent the last month focussing entirely on getting my house and then my studio "in order" and the time invested has certainly paid of. But I was aware that I was running out of things to "organise" and sort. Today when I woke up the plan (again) was to tame the studio once and for all! I went to the loft, moving stuff up the stairs as I went, and spent about an hour sorting and tidying. Suddenly I realised that even though there was still a lot to do I was well past that point where you know it's only a matter of time till it all pulls together. And that what I really wanted to do in this space that I had worked so hard to create was... create!

So I spent a wonderful afternoon up in my new studio working. And what a day it was... The sun was breaking through the rain clouds, glistening on the water the studio overlooks, "Prayer for Peace" was playing softly on the CD player, a mug of yarrow tea waited nearby. In no time I found myself in the wonderful meditative space that seems to find me whenever I take up my brush or needle. I chose to begin by touching up by hand a set of four greeting cards in my line of "SoulSpeak" cards, each one slightly different, no two ever the same. The messages written on them will touch each recipient in different ways. 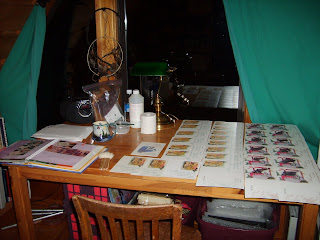 Was my house perfect? Not by a long shot! Is my studio exactly as I want it yet? Not in many ways. I don't have the right storage yet for everything, there is too much stuff on the floor and, well... still too much "stuff." Yet it felt great being up there in my tiny loft, sun streaming in through the windows, paintbrush in hand, the lines of cards growing without me even noticing, glancing probably way too often out the window, supper cooking in the kitchen below. As the shadows lengthened, I put the tops on the paint pots, planned my work for tomorrow and went for a walk along the beach in the setting sun, returning home to spend an evening with my love.

So the house isn't perfect yet, nor the studio, but you know what? Today was...
Posted by Shena Meadowcroft at 9:11 pm